In Australia and other parts of the world, there is a trend towards using bulls at yearling age (12–18 months). This allows introduction of superior genetic material into herds a year earlier than normal, resulting in faster genetic improvement. Their introduction has the potential to allow breeders to extend the working lives of bulls by a year or more, lowering the bulls costs of a herd. This extra workload is achieved at the time in their lives when they are young, lean, fit and exuberant. They are free of the structural problems that beset older bulls. Yearling bulls have much to offer, both genetically and financially. However, poor management can reduce calving percentages, compromise animal welfare and limit their lifetime potential. In order to harness the immense potential of yearling bulls, special management is required—their age and physiological status demands it.

Why are yearlings different?

Apart from their age, yearling bulls are different from older bulls in a number of ways.

- They are still growing strongly, and tend to be leaner, carrying less body fat reserves. They are usually fitter and more agile, although not necessarily stronger, than older bulls. They are also smaller in size and more subordinate to older bulls which make them more injury-prone when mixed with them, especially in the sexually competitive environment of a joining group.

-Yearling bulls are usually sexually inexperienced, are more likely to be sexually immature, and their health and body condition are far more sensitive to poor nutrition and the challenges of internal and external parasites. Although special management is required, much of it is common sense.

Cattle producers with experience in managing yearlings often say that they prefer them because they settle in better, mix with other cattle more easily and are easier to handle than older bulls. However, there are some far more tangible incentives in using them. In south-eastern Australia, the average working life of a bull is less than 3 years—not a very satisfactory performance for one of the main operational costs of a beef cattle enterprise. By first using bulls as yearlings, the working life of a bull can be extended by a year or more—a 25% increase. As a result, the purchase price and running costs of bulls can be spread over more calves. This reduces bull costs per calf and boosts profitability.

Yearling bulls also allow cattle breeders the opportunity to achieve faster rates of genetic improvement. This is due to the influence of what geneticists call ‘generation interval’, that is, the average age of parents when their calves are born. By using genetically superior bulls as young as possible, faster turnover rates of genes are achieved. Joining yearling bulls to yearling heifers can maximise genetic improvement by lowering generation intervals.

Yearling bulls are significantly less costly to produce. Seedstock suppliers sell their bulls 6–12 months earlier, which simplifies their management and reduces overheads. In addition to these advantages, there is strong circumstantial evidence to suggest that bulls used first as yearlings have even longer working lives because of superior fitness and lower levels of body fat. The more active lives of these bulls means that they are maintained at body weights below their genetic potential. As a result, less stress is placed on their skeletal structure when serving, with less likelihood of breakdowns occurring. The two biggest causes of breakdowns in bulls are hip arthritis (over 50% of all wastage) and broken penis. Over conditioning bulls for shows and sales, especially multivendor sales, exacerbates both these conditions. It would appear that bulls used first as yearlings are less affected by these serious sources of economic loss.

Will yearling bulls be sexually mature?

British breed yearling bulls will generally be sexually mature if they:

The onset of puberty is directly related to the level of nutrition. Bulls on a high plane of nutrition are more likely to reach puberty at a younger age. In some cases, this may be as young as 8 months of age. Poorly grown or low-condition bulls are risky for use as yearlings, as they may not have reached puberty. Around puberty, testicles grow very quickly, resulting in a rapid increase in scrotal circumference. In well-grown British breeds this ‘growth spurt’ is normally expected to take place between 8 and 13 months of age, under optimal nutrition.

In general, some European breeds and Bos indicus, or their derivatives, reach sexual maturity later than British breeds. As a result, they are often not suitable for use at yearling age. Dr Glen Coulter of the Agriculture Canada Research Station, Alberta, has documented the minimal scrotal sizes across all breeds. These are based on thousands of measurements and are set out in the table below.

Yearling bulls are usually sexually inexperienced. As a result, they are sometimes, but not always, a little clumsy and awkward. However, young bulls have very steep learning curves. This learning phase may cause minor delays in the start of calving. Should this be a problem, joining should start 7 or 14 days earlier than normal to compensate for the slight delay.

Yearling bulls can be effectively joined either individually or in peer groups. They should not be joined in a group with older bulls because of ‘dominance’. In a mixed group, older bulls may get up to 75% of the cows in calf while young, subordinate bulls miss out. Joining yearlings with older bulls is not only wasteful and inefficient, it is also risky, as the young bulls tend to be more injury-prone. In addition, there is less risk of exposure to venereal diseases when young bulls are joined in peer groups.

Bulls that are being watched by other bulls are likely to serve females more often—they respond to an audience. Conception rates in multiple-joining groups are usually higher, which is understandable, since there are more services made in multiple-joining groups than in single-joining groups. It is not uncommon for bulls joined in groups to fight in the first week of joining, even though they had been run together before joining. Apparently they sometimes need to re-establish a pecking order. This settling-down phase may help explain why calves occasionally start arriving later than they should.

Multiple-joining groups have traditionally been a kind of on-farm insurance policy against the risk of having a dud—if one bull in the group is freeloading, the others will cover for him, and so conception rates don’t suffer. But the insurance does not come free (it never does). There is evidence that injury rates in multiple-joining groups are higher, especially when the bulls in the group are of different ages. The incidence of ‘broken penis’ is higher in multiple groups, especially when young bulls are joined in a group with older bulls. Yearling bulls should never be joined with older bulls—the risk of injury is just too great. They should be joined either by themselves or with other yearlings.

Won’t yearlings be too small to reach my cows?

If the biggest cows in a joining group fail to conceive, size may be a factor. However, it is risky making ‘blanket’ statements.  The sexual prowess of some small, high-serving, yearling bulls serving dry cows significantly larger than themselves has been witnessed at Trangie Agricultural Research Station, and one wonders how it was physically possible. Sex is apparently a wonderful motivator!

Won’t joining bulls as yearlings knock them around?

Bulls do not die from too much sex. However, they do lose condition. This will depend on their health, the quality of their feed, the length of the joining period and the number of females they are joined with. A lot of common sense is needed in order to strike a balance. In extensive areas with only average or poor quality feed, the joining season should be restricted to 6–8 weeks.

The use of yearling bulls is limited only by their health and fitness. It does not matter whether they ‘won’t grow out’ as it’s just not relevant. If our beef industry is to make progress, we must purge our minds of the belief that a bull has to be fat and well grown to be any good. The value of a bull should be measured by the performance of his offspring—not on what he looks like. After all, when was the last time you saw a fat rabbit, fox or roo? Those species carry no subcutaneous fat, yet they don’t appear to be facing extinction!

Maintaining bulls in anything fatter than 2 or 3 score condition is wasteful, counterproductive and inefficient. Bulls that are allowed to get fatter than this are either sexually inactive or under-used.

It is surprising how many cattle producers think that young bulls are more likely to sire small calves. They are purchased in the mistaken belief that they can reduce calving difficulties. Clearly that is not the case. There is no relationship between the age of a bull at joining and the weights of his calves. The birthweight of calves is heritable, so a bull will influence, genetically, the birthweight of his calves.

If you are concerned about birthweight, buy a bull that has a low estimated breeding value (EBV) for birthweight, or one that had a lower birthweight than the average of other bull calves in the same drop. If data on birthweights is unavailable, select a bull of only moderate size or one that has been successfully delivered by a heifer. In general, larger framed bulls tend to have heavier calves at birth. Mating large-framed bulls to small-framed heifers or cows will increase the risk of calving problems. The practice may also lead to animal welfare problems.

In order to harness the potential of yearling bulls there are three crucial management requirements:

1. Join them either alone or with bulls of the same age.

3. After removing yearling bulls from their joining groups, place them on high quality feed in specially prepared paddocks.

4. Yearling bulls should be joined to 25-30 cows in their first year.

5. If yearling bulls fall below condition score 2, they should be withdrawn from mating as sperm quality may be impaired. 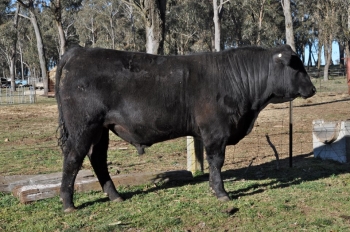