Pestivirus is widespread throughout the Australian cattle population. About 70% of herds are actively infected with the virus. Infection of susceptible animals can cause a variety of diseases, some not apparent until well after the initial spread of the virus in a herd.

Spread and persistence of pestivirus in a herd

When an animal comes into contact with pestivirus for the first time, it will be susceptible to infection. However, its immune system quickly responds to eliminate the virus by producing antibodies. The virus is cleared from the animal’s tissues within a few weeks of the initial contact. In non-pregnant animals under normal grazing conditions, the spread of the virus is usually unrecognised because the signs of infection, if any, are very mild. In herds where infection has occurred before, many of the adult animals are already immune and do not become infected. If a cow is infected for the first time during the first 3–4 months of pregnancy, and the foetus survives the infection, then that calf is likely to be persistently infected and become a ‘carrier’ of the virus for life. An animal becomes a carrier when, as a foetus, it is exposed to the virus before its immune system is mature enough to recognise the virus as something foreign. The foetus, when exposed in the first 3–4 months of gestation, accepts the virus as a normal part of itself, and sees no reason to produce antibodies against it. The virus will therefore continue to multiply in the tissues of these calves while they live, without any defence being mounted against it. These animals generally have markedly reduced life expectancy and can die at any time, even before birth. Many will be smaller at birth than is usual. When the foetus is infected after about 4 months of gestation, it is able to produce antibodies, and so will not become a carrier of the virus. However, it may still develop abnormalities because of the infection. Note that the cow develops immunity normally and eliminates the virus from her own tissues, regardless of the stage of pregnancy.

The key to the survival of the virus in a herd is the persistently infected ‘carrier’ calf. If there are no carrier animals left in a herd, the virus quickly dies out, as it is destroyed by sunlight and high temperatures in a very short time, usually less than one day. Pestivirus is shed in all body secretions of a ‘carrier’ animal: saliva, tears, nasal discharges, milk, urine, semen and dung. Spread to other animals is by direct contact with the carrier animal or with its secretions. When young animals become infected after they are born, even while their body is still developing an immune reaction, they usually do not shed sufficient virus to infect other animals. If a carrier infects another susceptible cow which is less than four months in calf, the foetus will become infected. If the foetus survives to birth, the survival of the virus will be assured for at least another generation.

Diseases due to Pestivirus

Diseases due to pestivirus can be expressed as:

• Ill thrift and diarrhoea (these are mostly restricted to the persistently infected animals);

• Suppression of an animal’s immune system, with increased risks of other diseases;

• Severe bleeding disorders and rapid death (this has not been observed in Australia).

Pestivirus can cause significant economic loss, through reproductive failure, if breeding females are exposed to the virus for the first time while they are breeding, that is, before they have developed immunity. Losses can occur if animals are infected from 1–2 weeks before joining, until about seven months of pregnancy.

Depending on the stage of pregnancy and the strain of virus, a cow may:

• Reabsorb a very early pregnancy and return to service;

• Produce a calf which is a virus ‘carrier’, which will develop other diseases and eventually die;

Most producers have had a beast from time to time that has ‘never done any good’ – the one they would prefer visitors not to see! This type of animal may well be a pestivirus carrier. However, not all carriers can be recognised in this way. Some can remain apparently normal into adulthood.

A carrier may remain in the herd unrecognised until it is infected with another, more damaging, strain of pestivirus. Then, because the carrier animal does not recognise the virus as foreign, it does not produce antibodies, and so has no defence against the virus. It develops the fatal condition known as mucosal disease. The onset of mucosal disease usually occurs when the calf is between 6 months and 2 years of age but can be later.

The clinical signs of mucosal disease include:

• Ulcers may occur on the coronet and between the claws of the hoof, causing lameness.

While these animals sometimes show brief periods of improved health, death usually occurs from one week to several months after the onset of symptoms.

Pestivirus can be a cause of respiratory disease, especially when animals are managed intensively (e.g. feedlots, calf-rearing units) or are under severe stress.

Additionally, pestivirus infection results in immune suppression, which may allow other viruses and bacteria to infect the animal as well, producing more severe respiratory disease.

Severe outbreaks of respiratory disease involving pestivirus are more likely to occur soon after animals from different groups or properties are mixed, as there is a greater risk of contact between susceptible animals and a carrier. This can happen at weaning, during transport to saleyards, or when animals are introduced to a feedlot. There is also a greater likelihood of exposure to many disease agents when stressed animals from a number of different sources are mixed.

When normal animals in a low-stress environment, such as when at pasture, are infected with pestivirus for the first time, they usually show no signs of infection. However, with some strains of pestivirus they may show mild, transient diarrhoea. This form of the disease is known as bovine viral diarrhoea, but it is rarely observed in Australia.

Overseas there are some strains of pestivirus that can cause severe disease, even in animals on pasture. They are known as Type 2 strains. Signs can resemble severe mucosal disease and include bloody discharges, ulceration of the mouth and nose, severe diarrhoea and rapid death. These viruses are not present in Australia.

Veterinary assistance and collection of suitable specimens for laboratory examination are necessary to establish pestivirus as the cause of reproductive and other diseases. Blood samples are usually taken from suspect animals, for example from those that have aborted, and from a representative sample of the herd. These samples are then checked for the presence of antibody to the virus. When animals are suspected of being carriers, tests are carried out on blood or skin samples for the presence of the virus.

Managing pestivirus in the breeding herd

It is important to know whether you have pestivirus in your herd, but its presence need not be a major concern if properly managed.

Control measures if your herd is positive

If pestivirus has been diagnosed as a reproductive problem on your farm, your veterinarian will review the current herd situation and provide advice on whether further losses may occur. It is likely that once a disease outbreak has started, the virus will be widespread and there may be few susceptible animals remaining. For disease control the main options are as follows.

Option 1. Identify all carriers in your herd and dispose of them.

This requires testing of all animals in the herd, and of all calves born during the nine months following the herd test. Because of the constant danger that the virus may be reintroduced from an outside source, this option is usually not recommended on its own, but may be used in conjunction with vaccination (see Option 3).

Option 2. Manage the herd to maximise the likelihood of infection of young heifers well before mating.

This can be done by running heifers with a carrier, if one has been identified. Any steers that may enter feedlots should also be deliberately exposed. Because pestivirus is highly infectious, all animals in herds that are yarded and handled frequently are likely to be infected if a carrier animal is present. In larger herds that are run in several groups, individual carriers can be confined to one group. Cross-weaning and mixing of unjoined animals will increase the chances of exposure and development of immunity. If in doubt, blood test a proportion of heifers before they are mated to check that they are already antibody positive, and therefore immune.

If your herd appears to be negative

If a pestivirus problem has not been recognised, the virus could still be present and widely disseminated, in which case there would be a high level of herd immunity. However, in many herds, the carrier animals have died out and there are many susceptible breeders present. There may be some closed herds that have not been exposed.

If pestivirus is not currently active in the herd, it is important to minimise the potential danger of losses due to pestivirus introduction by:

• Watching for suspicious symptoms, and having these investigated as soon as possible;

• Considering the use of a vaccine, now that there is a locally produced vaccine available in Australia.

If you have cattle that are involved in embryo transfer or artificial insemination programs, especially concerning oestrus synchronisation, it is recommended that the pestivirus status of all animals be determined.

• Any carrier should be excluded.

• Both donors and recipients involved in an embryo transfer program should test antibody positive (and therefore immune) at least four weeks before starting the program.

• Antibody negative animals are likely to be susceptible to pestivirus infection, and should be fully vaccinated well before receiving embryos, or they should be excluded to avoid the risk of later losses.

For optimal efficacy, it is important that a pestivirus vaccine be directed against the virus strains that are found in Australia, otherwise the vaccine may not confer adequate protection. A locally produced vaccine is now available in Australia. This should be valuable in reducing reproductive wastage caused by this virus, and reduce losses in feedlots due to bovine respiratory disease associated with pestivirus infection.

It is recommended that you discuss with your veterinarian the merits of vaccination in your own situation.

If the decision is made to vaccinate, the program must be ongoing. To discontinue vaccination after a short time would be to invite disaster, as all natural immunity due to ongoing exposure will have been lost, and the whole herd would soon become susceptible to infection.

Initially the whole herd should be vaccinated. Two doses of vaccine are required at an interval of at least 4 weeks, but up to 6 months is possible, allowing vaccination to be integrated with other management practices.

For optimal protection, it is essential that the vaccine be used in accordance with the manufacturer’s directions. The full vaccination program should be completed at least two weeks prior to joining, or, in the case of intensively managed animals, 2–4 weeks before they come into contact with animals from other sources.

The significance of a single animal being ill may be overlooked, as often occurs with animals that are persistently infected. It is important to realise that this single case could be an indicator of the potential for greater losses, due to the reproductive and other effects of the pestivirus.

Awareness of the presence of pestivirus, followed by appropriate management strategies, will minimise losses. If you suspect that the presence of pestivirus may be causing problems in your herd, contact your veterinarian (your private practitioner or your local Rural Lands Protection Board) to arrange further investigation. For further information see: www.bvdvaustralia.com 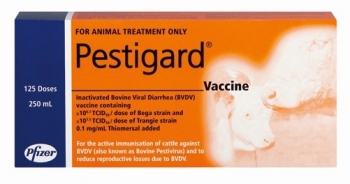